New Life for a Tired Staircase

My house was built in 1875 and the years have not treated it kindly. It has been subjected to multiple renovations, including being carved up into apartments in the 60s and then turned back into a family home a decade later.

The front stairs were built in 1975. Each step is a different size, it has Victorian railings, improvised wainscotting and rustic pine stair treads. Much like the rest of the house, it doesn't match itself and it needed help. I knew I could never afford a custom stair runner so I started researching painted stairs and fell in love with this photo from a Pottery Barn book on Kids Rooms.

With only three feet between the stairs and a wall, and no windows in the front of the house, it's hard to get a nice shot but this shows the steps taped off. 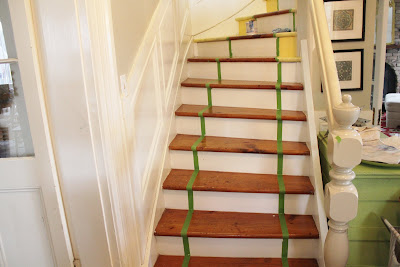 I wanted my "runner" 25 inches wide, so based on the first step, I had 7 inches on each side. I measured 7 inches from the right edge of every step and placed the second band of tape so that the outside edges were 25 inches apart. To tape the risers, I measured straight down from the outside edge of the tape on the top tread to the outside of the tape on the next tread. I marked it with a pencil and applied the tape along the line. Three coats of yellow floor paint from my local hardware store, colour matched to Behr Pyramid Gold and it was looking better already. 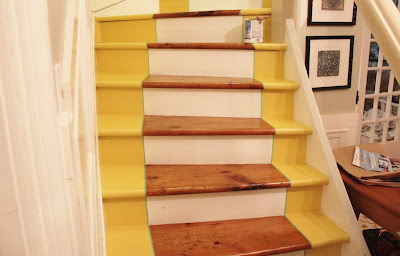 When the yellow was dry, I ran a strip of very narrow tape up against it, basically as a place holder for the stripe. Two coats of primer and two coats of white floor paint - can't remember the exact colour, just a warm white that I thought went well with my yellow. When the white was dry and cured (three days), I put a band of tape on either side of the narrow piece and removed the narrow piece to paint the navy blue stripe.

Center each square on the riser, peel the backing off and stick it in place, if it's not perfect you can reposition it. Once all the squares are in place paint the first coat with whatever colour you are painting over. In this case I gave every number a quick coat of white paint - it seals the stencil so the colour coat won't bleed through. Three coats of navy blue craft paint - I needed so little, I didn't want to buy a big can - one coat of clear gloss on top. I taped off the stripes (one piece of wide tape on either side of the narrow, then remove the narrow tape) and used the same approach. Resist the urge to peel off the tape until everything is really dry. 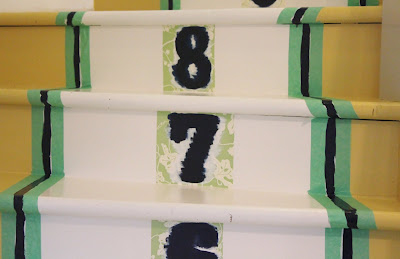 When all the paint is nice and dry, you can start peeling! Isn't this everyone's favourite part? And now it's time for the big reveal! 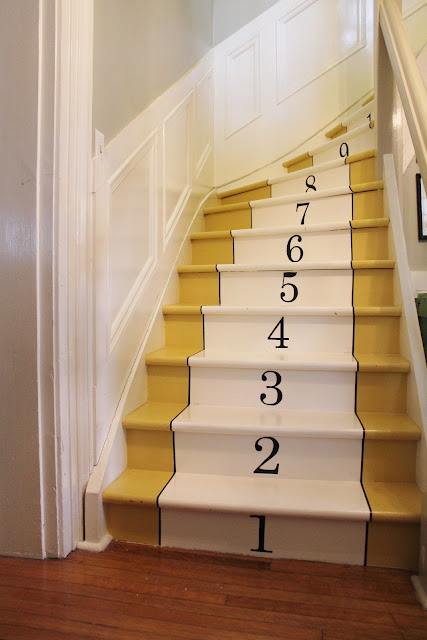 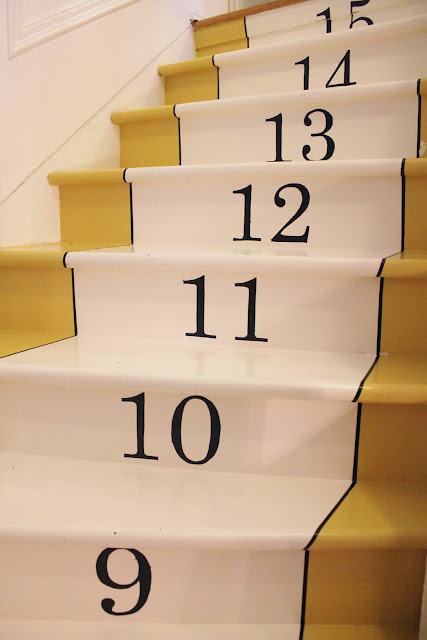 I still can't believe these are in my house! I am so pleased with how they turned out and my kids love them. I had to do a little bit of touching up when the new paint peeled off the old, but overall it came out really well.

We are lucky because I have two staircases in my house so having this one out of commission for two weeks was no big deal. Even if you are painting the only staircase in your house, a project like this goes in phases so there's very little time when you can't use the stairs at all and each step doesn't take too long.

Now for that back staircase....

Hi! I am the girl behind EllaBoo & Company - I have three fabulous children and a wonderful husband who always stops the car when I see something great on the curb! We are all living happily ever after in small-town Ontario, Canada with a little white dog.
I work full-time but spend every minute I can with my family and doing what I can to make our house a cozy home. Thank you for dropping by - I'm glad you are here.